CWEBE, DWESA and THE HAVEN HOTEL

The Haven is a long-established Wild Coast hotel and its history can serve as an example of events that happened – with local variations – hotels and nature reserves throughout the Wild Coast, as a consequence of the changing political scene.

The Haven was founded in 1922 by Edward Reid, a former seaman, hence the hotel’s name.  It was unusual, being a private hotel in the Cwebe Protected Forest.  It was established to provide white Transkeian residents – traders, civil servants, etc – the opportunity for seaside holidays. To ensure its viability, it was opened to the public and thus provided the first tourist facility at Cwebe.

Being situated on State land, The Haven has been bobbed around, like a cork in the sea, by upheavals in the political situation.

Until the early 1970’s,the situation was fairly tranquil.  The Forestry Department lived in harmony with the surrounding residents who could move freely through the protected area to access seafoods, which they were free harvest. The local community also accepted the successive owners of The Haven – Edward Reid, Gordon Hill and Matthew Dold Mitchell – as the hotel job opportunities.

Edward Reid ran The Haven from 1922 to 1946, Gordon Hill, a businessman from Johannesburg, joined him as a partner. When Reid died in 1953, Hill bought all shares. Reid is buried on the hill overlooking the hotel. Hill was a somewhat eccentric bachelor who loved fishing, and it was this that attracted him to The Haven.  In 1968, Hill sold the P.T.O (permission-to-occupy permit that cost R120 per year) to Matthew Dold and Mercia Mitchell. Mitchell had grown up in the Transkei. 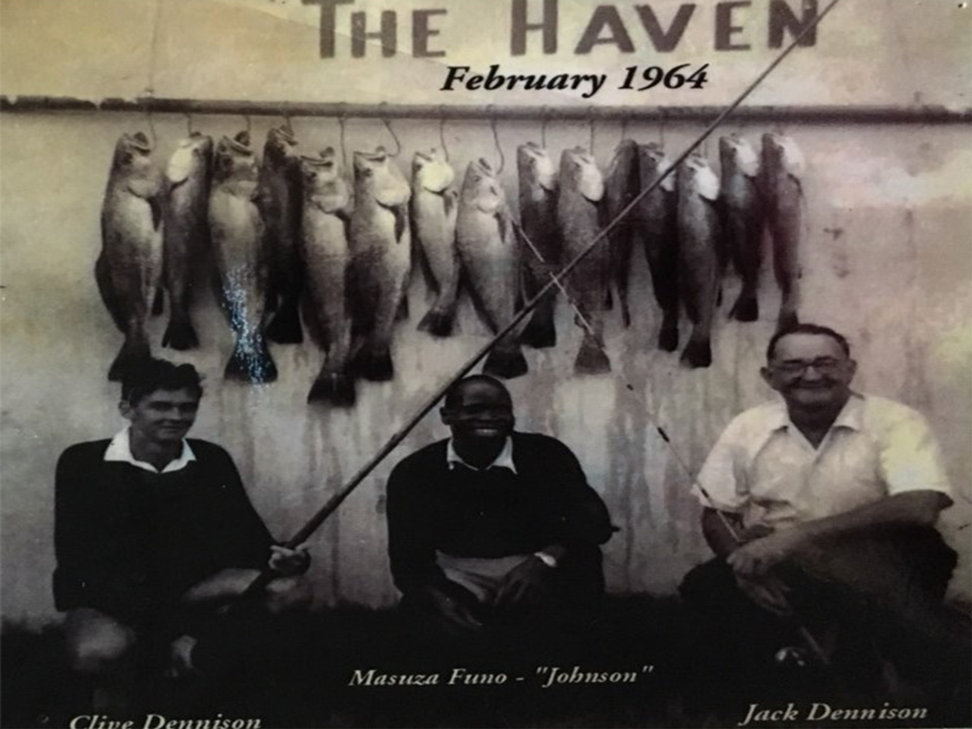 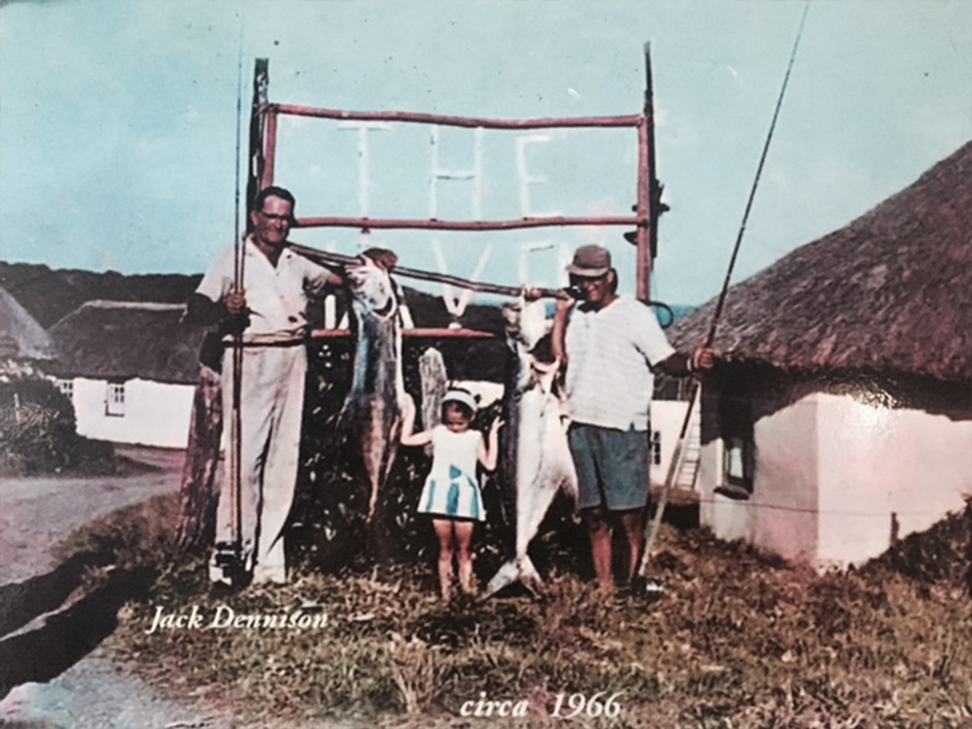 In Gordon Hill’s time, a Mrs Beattie ran the kitchen and her husband was in charge of general maintenance.  The Mitchells effected several improvements to the hotel, including the construction of a new reception area/office, a new lounge and extensions to the dining room.  They built a number of new en suites chalets, to the right of the dining room, and also established a golf course/landing strip on the grounds in front of the hotel. 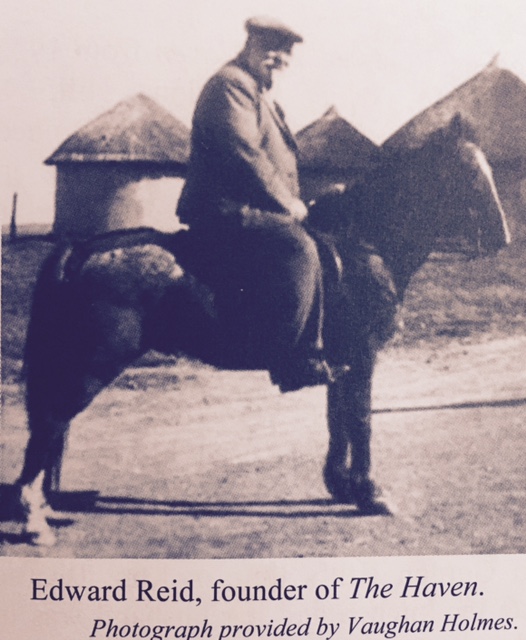 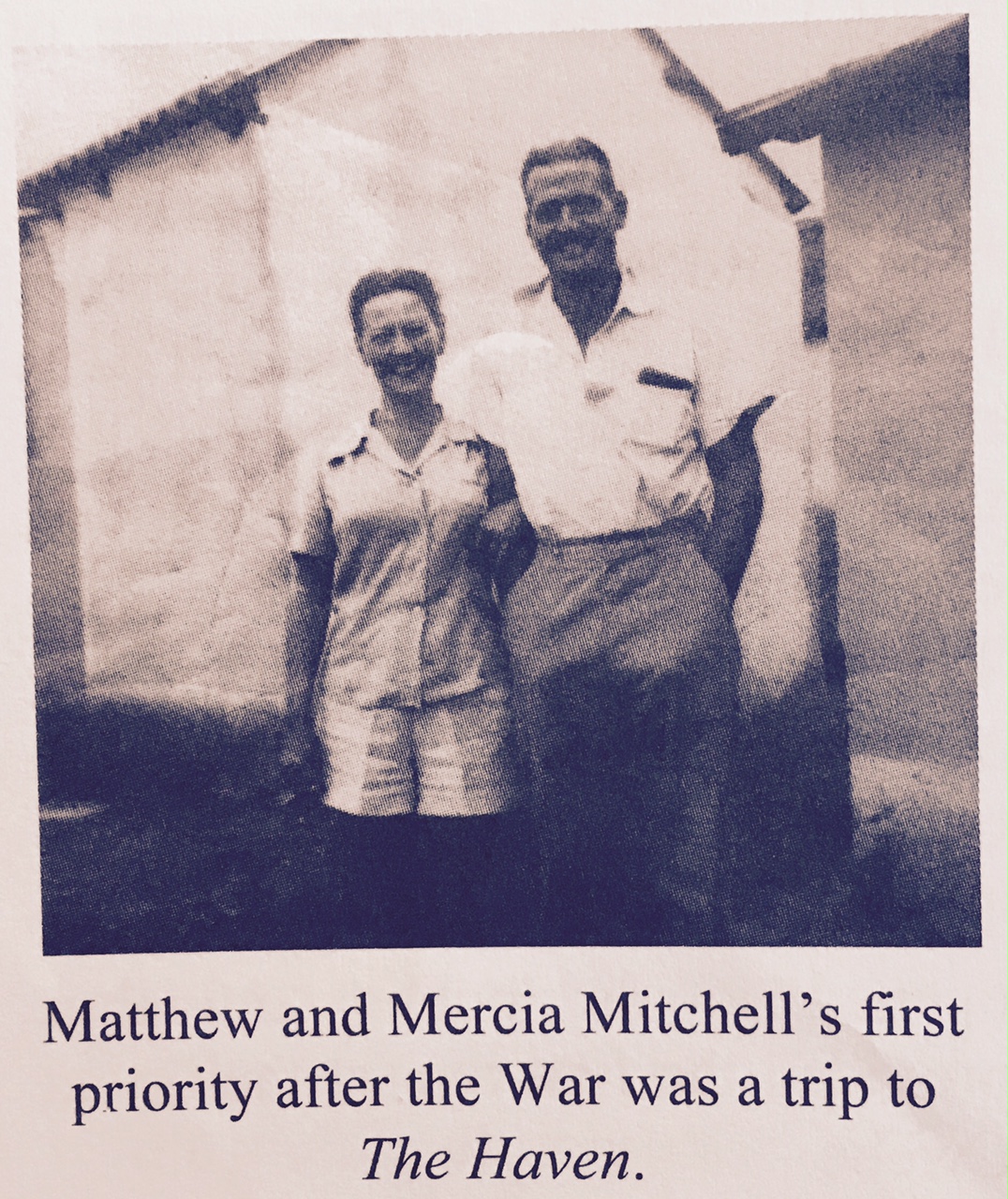 With independence, in 1976, the Transkei Development Corporation (TDC) took over eleven coastal hotels, including The Haven, and invested heavily in upgrading them.  However, the hotels didn’t thrive, with occupancy rates dropping below 50%.  A reason may have been the central booking office in Umtata, which gave a standard reply, “fully booked”, to any enquiry.

The Republic of Transkei planned to make the combined Cwebe/Dwesa reserve into a showcase wildlife reserve, to underscore its newfound nationhood.  The reserve was fenced, numerous game animals were introduced and local residents were excluded.  Because of its greater wilderness character, Dwesa was chosen as the major site for the introduction of animals.  The usual mix of animals was introduced, including blesbok, kudu, blue wildebeest, impala, reedbuck, eland, red hartebeest, warthog and white rhinos.  Vietnamese hunters have recently, and controversially, been given permits by Eastern Cape Nature Conservation to shoot some of the rhinos.  They justified the issuing of permits by arguing that rhinos are not indigenous to the area.

Two Nile crocodiles were also introduced into the Mendwana River.  In 2008, Errol Seager photographed, from the air, two crocodiles on the beach at the river mouth.  They have thus evidently survived, although I am told that this is too far south, and thus too cold, for them to breed successfully.

Introduction of the animals had unfortunate consequences for the local traders who had holiday cottages at Mendwana.  These including Victor Tomes (Mendu trading station), Ernest Bohling (Lurwayizo trading station) and the Wood families from Mpozolo and Nkanga trading stations.  They were forced to abandon their cottages, which were then demolished.  Traders with cottages near The Haven, including Harland Woods from Hobeni, Harold Bruce from Mthatha, and the Puttergill, Hassall and Holmes families, were more fortunate in that they were allowed to keep their cottages.  Those at Nthlonyana were also not disturbed.

At one time, the eland and wildebeest used to cross the Bashee River and could be seen at Cwebe.  The wildebeest, especially, became accustomed to humans and could often be seen grazing on the airfield/golf course in front of The Haven hotel. The locals bitterly resented being excluded from the reserve, to which they had previously had free access, and this had major ramifications.  Their exclusion was extended to the sea, in 1991, by the establishment of a marine reserve, in which no collection of marine organisms was permitted.

Major Bantu Holomisa took control of the Transkei in a military coup in 1987 and his reign turned to near-anarchy after the 1993 murder of Chris Hani, Transkei-born leader of the South African Communist Party.  Holidaymakers and motorists were attacked and white holidaymakers simply stopped going to the Wild Coast.  This dealt the tourism industry a severe blow and several hotels collapsed.  Near-anarchy coincided with severe drought.  Cwebe/Dwesa, local residents appealed to the conversation authority, traditional authorities and the ANC, to be allowed to use the Cwebe reserve for emergency grazing.

Their pleas went unheeded, so they simply herded their cattle into the reserve.  The authorities were unable to stop this, as the fence was easily sabotaged.  In early 1994, frontline communities requested formal restoration of their access to the reserve.  Getting no response, they held a mass protest meeting outside the reserve, attended by over 2,500 people.

The invasion had many organizations scrambling for influence or a regain control.  The army was called in to restore order while a period of intense negotiations ensued.  The Wild Coast Spatial Development Initiative came up with a grandiose plan and by 1997 had secured R500 million for development of the combined Cwebe/Dwesa reserve.  The plan included provision of 1222 beds in new hotels and lodges and a bridge over the Bashee River.

A scaled-down plan was presented at an international Investors’ Conference in East London in November 1997.  Asian investors showed interest in replacing The Haven with a modern mega-hotel but their plans were stalled by uncertainties regarding land tenure and later scuttled by the Asian financial crisis.

The new plan included a pont over the Bashee River in place of the originally proposed bridge.  Tenders were called for and a BEE contract was awarded for the construction of a pont and access roads, a few kilometres from the mouth of the Bashee River.  Allegedly, the final tranche was not paid, resulting in the contractor removing the engines from the pont.

Whatever the reason, not a single vehicle has ever been transported across the Bashee River by the pont.  Within a year the pont itself was washed away in a flood and access roads remain only as eroding scars on the landscape.  Somebody must be culpable for this wanton waste of money but, to date, nobody has been charged.

“In about March or April 2003, the contractors who were to build the road, etc. approached Bernard McDonald at Mount Pleasant and asked if he knew of anyone who could build a workshop and office on the site.  Bernard asked if I would do the job and I said yes.  We submitted a price and were told to go ahead.  I went to the site and was horrified at the stupidity and futility of building a pontoon there.

I told the site engineer and contractor that it was a waste of money, and that the pontoon would not last a year and would be waste away in the first decent flood.  Over the years, I had seen how ferocious the river could be.  However, that was not my problem and I agreed to build the workshop/office.

The pontoon had two 65 hp outboards, one of which was to be kept in the workshop whilst the other would be on the pontoon.  The motors were held back because of non-payment, so the pont was never used.  And it was washed away within a year.”

Concurrently, community leaders were working with the Transkei Land Service Organization to file a land claim on the Dwesa/Cwebe reserve.  Ultimately this was successful and community, through their Community Property Associations and the Dwesa-Cwebe Land Trust (the Land Trust), were awarded a restoration package of about R14 million.  A condition was that land-use would remain for conversation and they were further compensated for the “lost opportunity” represented by this restriction.  They also received a Settlement and Land Acquisition Grant of R16000 per household, which they pooled to invest in local tourism development.

At this time, the T.D.C. had leased The Haven to Mbashe Holdings.  With the settlement of the land claim, ownership of The Haven passed to the Land Trust.  Aware of the interest expressed by Asian investors, they prematurely – since nothing was finalized – gave notice to Mbashe Holdings of cancellation of their lease.  Realizing their error they later recanted but the lease was terminated on 15 September 2000 by mutual agreement.  Thereafter, community leaders contracted Protea Hotels to manage the hotel.  A bleak period followed.  The telephone seldom worked, so it was impossible to make bookings and difficult to determine if the hotel was even still running.  Managers were of variable quality – very good, indifferent and abysmal.

A condition of the land restitution settlement was that the area remained for conservation, managed by Eastern Cape Nature Conversation. However, one of the local residents’ complaints was that the grasslands in the reserves had always been available to them as emergency grazing in times of drought.  In this context they saw the wild animals as competition and most of the large animals have consequently been killed.  Guests at The Haven were mortified to see a wildebeest slaughtered before their eyes!  Wildebeest and eland are no longer seen at Cwebe, although some survive at Dwesa.

At Cwebe, the “emergency “grazing has now extended to every day, so cattle are seen in the grasslands at all times.  Both the killing of the introduced animals and the cattle grazing are manifestations of the tragedy of the commons in action.  The separation of land ownership from authority over land-use appears to be problematic and was perhaps not fully thought through.  Time will tell if the formula works or not, although further problems at Mkambati suggest that it is not working well.

As far as The Haven hotel itself concerned, things are looking up.  In 2005, Grant and Nicola Millar acquired the lease and are energetically revitalizing The Haven.  Occupancy rates are up and the hotel was full over recent seasons.  Mitchell’s field has also come into its own, making The Haven popular with the helicopter, autogyro and microlight fraternities.

“A HISTORY OF THE WILD COAST”