The reserve is probably most valuable for its flora, There are many species of trees plants and grasses which are under pressure.

Farming, harvesting of natural resources and fire contributes to a shrinking environment in which many species are able to grow.

The reserve provides an oasis best suited to preserve the environment and protect is species.

Fortunately the benefit is beautiful coastal forest and grassland to be enjoyed.

The Dwesa-Cwebe Nature Reserve includes one of the largest forests in the Transkei. The forest comprises two types. Coastal Forest occurs on sandy dunes next to the sea, which then transitions to Scarp Forest as the sandy soils give way to shales and clays a kilometre or so back the the shoreline.

The Haven Hotel tree walk
The Hotel offers a leisurely half-hour tree walk along the banks of Mpenzu Estuary. This trail takes guests through Coastal Forest along to edge of the estuary, giving scenic views across the water, before leading walkers back through a mosaic of trees and grassland. Typical trees along the trail have been labelled, and more information is provided about them below.

Common Trees
Black Bird-berry (Psychotria capensis). A shrub or small tree, also in the coffee family. Although the fruits may be black, hence the common name, they are often red instead.

Broom Cluster Fig (Ficus sur). Very productive for wildlife, this fig is usually found along in damp places, as on the Mpenzu Estuary.

Coast Coral-tree (Erythrina caffra). This is the tallest Coral-tree species in South Africa and is always found close to the coast. The brilliant red flowers appear in the winter and attract many birds, and the red and black fruits are commonly called lucky-beans.

Coast Silver-oak (Brachylaena discolor). This is a very common and hardy tree, usually found on coastal dunes. In spite of its size it is a member of the daisy family. The leaves are white beneath and on windy days give the tree a silvery appearance, from which it gets its common name.

Coastal Red Milkwood (Mimusops caffra). This species is only found on sandy soils close to the sea. These become one of the largest trees on coastal dunes. They are very slow growing and large trees may be well over a hundred years old. The leaves and broken stems have a milky sap. Trees produce masses of red fruits that are eaten by birds and animals. This is a specially protected tree in South Africa.

Dune False-currant (Allophylus natalensis). This is a hardy and common species, never growing far from the sea. The flowers attract many insects and the red fruits are loved by birds.

Dune Myrtle (Eugenia capensis). A neat shrub or sometimes a small tree, it is only found close to the sea.
Euclea natalensis (Hairy Guarri). One of the commonest species on coastal dunes, but slow-growing.
Ficus burkei (Common Wild Fig). These figs are amongst the largest trees in the Dwesa-Cwebe Forest. This is one of the most productive trees for wildlife and when in flower they attract many birds, particularly barbets, green pigeons, loeries (turacos) and starlings.

Jackal-coffee (Tricalysia lanceolata). A shrub or small tree also in the coffee family, it occurs in many forest types.

Quar (Psydrax obovata). A slow-growing member of the coffee family, common in forest on dunes.
Red Beech (Protorhus longifolia). A fast-growing tree that is often one of the largest trees in the Dwesa-Cwebe forest. It often has a few red leaves amongst the green of its canopy, hence the common name.
Red Currant (Searsia chirindensis). A common tree in both bushveld and forest.

Turkey berry (Canthium inerme). Also in the coffee family, this tree usually has strong, opposite spines.
Umzimbeet (Milletia grandis). One of the commonest tree in the Dwesa-Cwebe forest, it is in the pea family, producing very attractive pink flowers followed by golden-brown pods. The wood is very hard and traditionally used for walking sticks and utensils. It is specially protected in KwaZulu-Natal.
White Pear (Apodytes dimidiata). Recognizable by its pale bark and black and red fruits.

Wild Date Palm (Phoenix reclinata). A close relative of the Date Palm, this is a common species particularly in damp places such as along rivers and streams. The yellow fruits are loved by birds and together with another species, the sap is used to make a palm wine in KwaZulu-Natal.

Along the Haven Hotel Tree Walk, look out for young examples of the Real Yellowwood (Podocarpus latifolius),with narrow, horizontal leaves.

Scarp Forest
The Scarp Forest just back from the coastline is very diverse, comprising over 200 tree species. The many kilometres of roads through the forest towards Breezy Point make fine walking trails, with the cooler forest microclimate providing some relief on warm summer days. A walk from the Mbashe River to a community of White Mangroves (Avicennia marina), also showcases a diverse range of forest trees and herbs.

The rare Stangeria cycad (Stangeria eriopus) is often seen in the Dwesa-Cwebe Forest. In the summer the Forest Blue Bell (Thunbergia natalensis) produces many bell-shaped, pale lilac flowers along the roadsides. A larger, fine-leaved shrub with smaller, deeper purple flowers is Blue-lips (Schlerochiton harveyanus), which is very common along forest edges. Look out for the Forest Pink Hibiscus (Hibiscus pedunculatus) and yellow-flowering Forest Rattle Pod (Crotalaria natalensis). In a few damp places the rare, tall, white-flowering Moore’s Lily (Crinum moorei) can be seen, and secluded earth banks may be covered by African Violets (Streptocarpus primulifolius), with purple, trumpet-shaped flowers. From the late summer and autumn (February to April) many Forest Spur-flower (Plectranthus) bushes, with soft, aromatic leaves and purple flowers, also prolifically colour the roadsides and forest edges.

View more things to do 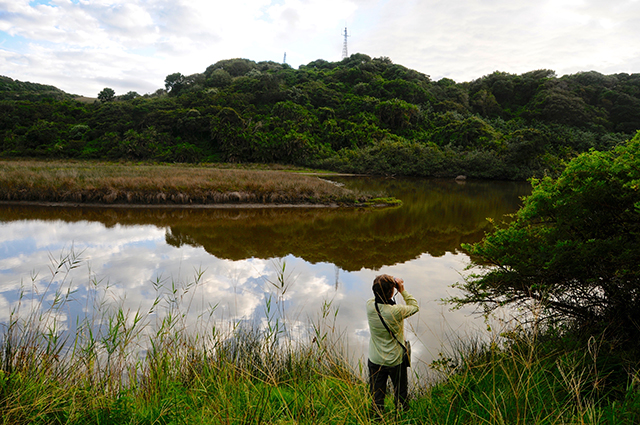 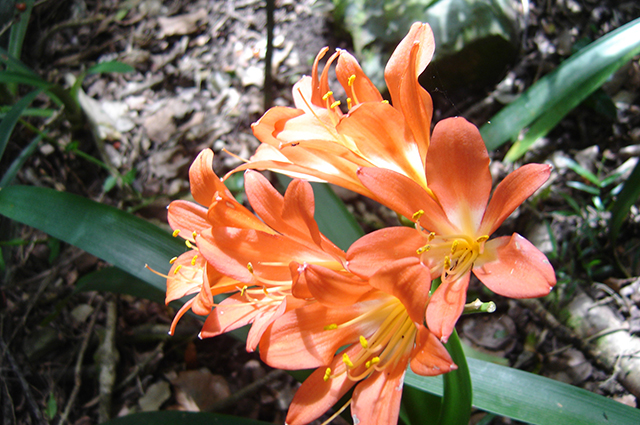